Paws for Wellness A happy and healthy pet starts with a plan!
Return To All Wellness Plan Options
May 12, 2016 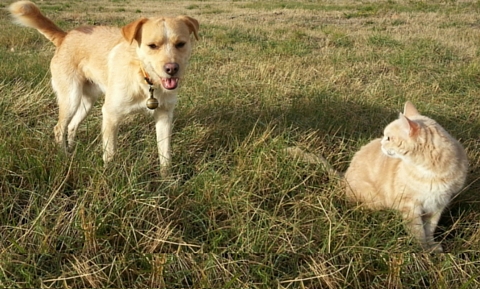 It’s that time of year again- when environmental allergens all come out to play and start wreaking havoc on sinuses and skin. Reacting to particles in the environment is not just for humans- animals can also have reactions to allergens in the environment. Allergens are predominately proteins from plants, insects, animals or foods. Dogs and cats in particular can have reactions to many air borne allergens, such as tree, grass and weed pollens; dust, mold, mildew and dust mites. Other common allergens are fleas and food allergies.

In humans, inhaled allergens cause respiratory problems such as asthma. The same thing can happen to dogs and cats. With dogs, asthma, or difficulty breathing, is typically referred to as allergic bronchitis, because for dogs this condition is almost always caused by something in the environment, most often something they have inhaled. Asthma- traditionally understood as it affects humans as a chronic inflammation of the airways- is not as common in dogs, although feline asthma is common and well documented. Smaller breeds of dogs are more susceptible to allergic bronchitis than larger breeds. In cats, the term” feline bronchitis” may also be used, to describe the coughing and wheezing they may experience when their lower airway is inflamed. The terms “asthma” and “bronchitis” may both be used with cats, and are considered two parts of the same syndrome affecting felines.

Clinical signs of allergic bronchitis in dogs almost always starts with a dry hacking, cough, which can some on slowly, or all at once. Respiratory distress, including difficulty breathing, shortness of breath, wheezing, and open-mouth breathing, as well as pale mucous membranes (blueish gums) lethargy, exercise intolerance, lack of appetite, and weight loss are all signs of allergic bronchitis.

Cats with feline asthma or bronchitis may experience many of the same symptoms, such as coughing and respiratory distress, which are indicative of the condition because there are relatively few causes of coughing in cats. Coughing cats also may assume a squatting position with their neck extended when coughing.

The most common symptoms associated with inhalant allergies in both dogs and cats is itching the skin, either in one specific area or all over the body. Sometimes, there may be runny discharge from eyes or nose. In other cases, the allergy symptoms affect the digestive system, resulting in vomiting and diarrhea.

Common allergens that can trigger an asthma attack or allergic reaction include the dust from kitty litter, smoke, from either smoking tobacco, or from open- flame fireplaces, wood stoves or outdoor fires; household cleaners, deodorizers, and air fresheners; perfumes, hairspray, pollution, as well as dust, dust mites, tree, grass and weed pollens, molds and mildew.

If your dog or cat exhibits these symptoms, you should get them to the vet as soon as possible. Asthma in dogs is usually diagnosed with X-rays and treated with various medications. Allergy testing can be done via skin tests or blood tests to identify the specific allergens that cause reactions. Because the majority of these allergens are environmental, it can be difficult to totally protect your cat or dog from coming into contact with them. Symptoms of atopy can be controlled, but not permanently cured. Allergies are generally controlled with one or a combination of treatments, including Anti-inflammatory therapy (anti-inflammatory drugs, such as corticosteroids, or with antihistamines, will quickly block the allergic reaction), shampoo therapy (frequent bathing with hypoallergenic shampoo to sooth itchy, inflamed skin, as well as removing allergens in and on the coat that can be absorbed through the skin), and Hyposensitization or Desensitization therapy (“allergy shots” that introduce very small amounts of the antigen, injected weekly, with the objective of desensitizing the immune system to the particular allergen). For cats that have only occasional asthmatic symptoms, your veterinarian may prescribe an inhaler, similar to the ones humans use.

Some ways to create a healthy living environment for you pet, if they are prone to environmental allergies or asthma that may help them avoid respiratory problems are to use electric fireplaces or candles instead of wood- burning fireplaces; use natural products like baking soda and vinegar to deodorize and clean your home instead of harsh chemicals and air fresheners; and consider installing an air-purifying unit in your home. Bathing your pet regularly, especially if they have recently spent a lot of time outside, can help to limit the amount of allergens that stay on their bodies, and are ingested during grooming.

Remember, animals are just like us, in that they can be sensitive to allergens in the environment that can cause a whole slew of uncomfortable and irritating reactions. If your dog is exhibiting symptoms you think may be caused by an allergic reaction, get them to the vet as soon as possible for a proper diagnosis, and don’t attempt to treat on your own. Make sure to follow your vet’s instructions closely to provide effective relief from allergens for your pet.