Paws for Wellness A happy and healthy pet starts with a plan!
Return To All Wellness Plan Options
May 26, 2016 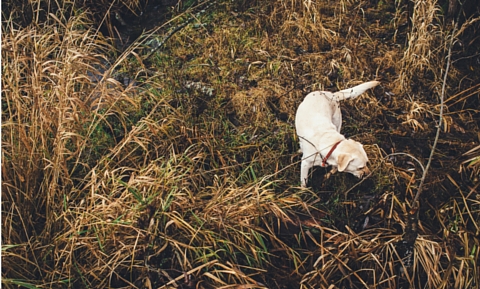 May is Lyme Disease Prevention Month! Lyme disease is a very serious and potentially debilitating bacterial infection that affects our canine companions, as well as humans, cats, and horses. Dogs are upwards of 50 percent more likely to get Lyme disease than humans.

What is Lyme disease?

Lyme disease is spread by ticks. Deer, or blacklegged ticks, are the main species of ticks that spread the disease in North America, but other tick species have also been found to spread the disease, specific to the country or region they are in. Lyme disease is caused by an infectious bacteria called Borrelia. When a dog is bitten by an infected tick, it passes the infection to the dog. A tick must remain attached to the dog for at least 36-48 hours before it is able to pass the infection. Ticks are drawn to dark, moist areas on the body, such as under the collar, under the tail, inside the groin area, between the toes, under front legs, and in the elbow areas.

Ticks are generally tiny, ranging from the size of a sesame seed to a grain of sand, and can be difficult to detect. Immature ticks, called nymphs, are especially tiny, less than 2mm and very difficult to see. Humans and other animals can all contract Lyme disease from ticks, but there is no evidence that suggests Lyme disease is passed from animals to humans, or from person to person. However, pets can potentially bring infected ticks into their homes, which could then infect humans.

Lyme disease has been reported on every continent in the world except Antarctica, although it is more prevalent in certain areas. Australia and New Zealand have very low incidence rates of Lyme disease, although cases have been reported. In North America, it is found in all states in the USA, although it is most prevalent in the northeastern, upper Midwestern and Mid-Atlantic states. In Canada, it has been found mainly in southern Ontario and Manitoba, with cases reported in southern Quebec and Eastern Canada as well. Forested, grassy and sandy areas are the highest risk for tick exposure. Ticks will cling to leaves, twigs or blades of grass, and wait until their sensors detect an approaching host on which to grab onto. Ticks can also live in backyard grass shrubbery and woodpiles closer to homes.

What are the symptoms of Lyme disease?

Signs and symptoms of Lyme disease in dogs are more difficult to detect than in humans. Humans often get a characteristic “bulls eye” rash at the infection site, but animals don’t develop this tell-tale sign. Because other symptoms of Lyme disease are common and found in relation to many other diseases, some dogs may go over a year before showing symptoms, and is often not considered until other potential conditions have been ruled out.

Clinical symptoms of Lyme disease are lameness, swollen joints, and fever, with other symptoms occurring secondary to fever. The lameness associated with Lyme disease, or Lyme-related arthritis as it is sometimes called, can also be referred to as ‘shifting leg lameness’, and occurs suddenly as affected joints become swollen and joint fluid builds up. The lameness usually resolves quickly, but can reoccur in a different joint or limb, often meaning that the dog is not properly treated or diagnosed. Dogs with Lyme disease often run high fevers, with lethargy, lack of appetite, swollen lymph nodes, and increased water consumption and urine output resulting as the body attempts to eradicate the bacteria. The more serious consequences of Lyme disease can be multiple organ damage, and sudden kidney failure.

How can I prevent my dog from getting Lyme disease?

There are many things you can do to help prevent your dog from contracting Lyme disease. The best method of prevention is to avoid areas that are known to be heavily infested with ticks, especially in the springtime when the nymphs are most active. In your own backyard, remove tall grasses and clear brush from around the house and areas your dog frequents, to control the environment ticks can thrive in.

Any time your dog has been in area where ticks may live, such as wooded areas or meadows, check your dog for ticks promptly and thoroughly afterwards. Remove any ticks that may be on your dog using tweezers, ensuring you protect yourself from exposure by wearing disposable gloves.

Talk to your veterinarian about the tick preventatives that are available, and ask for their recommendation on what products are best for your dog, based on the area you live in and your lifestyle. Remember that no one product can guarantee absolute protection. Topical preventatives are usually reapplied every 30 days and are easy to use. Your veterinarian may recommend you reapply in between doses if your dog has been swimming or bathed. Collars are widely available that repel and kill ticks via a medication that the collar emits. However, most collars won’t suffice as an effective preventative on its own; since the medication is concentrated around the head and shoulders, the hindquarters are often left less protected. There are also chewable tick preventative tablets that provides tick protection for much longer than topical or external tick preventatives.

Vaccines for Lyme disease are available in North America and other parts of the world with high incidence rates. They may be unavailable in areas with low rates of reported Lyme disease. Your veterinarian may recommended it for dogs who live in endemic areas, or that are frequently in environments where ticks may be prevalent. The vaccines are most effective before any exposure to Lyme disease, so vaccinating as a puppy if you live in high- risk areas is something to consider, although vaccinating dogs who are grown or who have already been exposed to Lyme disease can still help to prevent reinfections. Yearly revaccination is necessary to maintain immunity for your dog. Talk to your veterinarian about whether the Lyme disease vaccine is right for your dog.

Being knowledgeable about Lyme disease and taking steps to prevent your dog from contracting is it greatly preferable to having to treat your dog for Lyme disease once it has been infected.